Nowadays, there are many overseas lovers of the alcoholic beverage “SAKE", but although we can talk about the taste such as the elegant sweetness of rice and the aroma like flowers, few people know about its history. Here, we explain the origin and manufacturing method of sake, and the history of sake in a chronological order in an easy-to-understand manner. We also introduce sake breweries that represent Japan, you could use them as a reference when deepening your knowledge of sake that is popular around the world.

◆ Origin and characteristics of Japanese sake

◆ The customs of drinking Japanese sake in Japan

◆ Origin and characteristics of Japanese sake

Explanation of origin and produce of sake in Japan

There are various theories about the origin of sake, and while it is said that it was during the Yayoi period when rice growing become prevalent in Japan which is 2,500 years ago. which is the raw material for sake, was introduced, there is also a theory that sake using rice was already drunk during the Jomon period.

The oldest written records about the Japanese sake are found in the third-century. A description about sake using rice has been found in western Japan such as the Kinki region and Kyushu, and it seems that rice-derived sake was drunk at least in western Japan during the Yayoi period.

There is also a theory that the method of making sake was introduced from China to the Kyushu region shortly before the Yayoi period.

At the time of the birth of sake, there is a description about “口噛みノ酒 KuchikamiｰnoｰSake"(chewed before fermentation) as one of the sake brewing methods. KuchikamiｰnoｰSake is a sake that a shrine maiden involved in Shinto ritual chews rice in her mouth and ferments it with enzymes contained in saliva. Some of you may know it because it may appear in movies and anime.

There is still a myth about how to make sake, but it is not clear because there is a theory that it uses fruits instead of rice. It can be said that sake has such a long history.

◆ The history of Japanese sake in a chronological order

How was sake made, enjoyed, and spread in each era from the birth of sake to the modern era? explanation of sake brewed in each era.

Sake has been drunk for some people since before, but it is said that the manufacturing method using rice jiuqu was introduced from China during the Nara period, and the current method of brewing sake has spread nationwide. It was around this time that the “造酒司 SakeｰnoｰTsukasa , MikiｰnoｰTsukasa" was established to manage the sake presented to the emperor for ceremonial use.

In the Heian period, the number of documents that describes how to make sake in a more detail is increasing. “僧坊酒 SoubouｰShu" made at temples and shrines such as Mt. Koya was popular as high quality sake at that time. However, sake at that time was mainly used in Shinto rituals, and it seems that it was not something that people could easily put in their mouths.

During the Kamakura period, the rise of so-called “鎌倉仏教 Kamakura Buddhism" led to an increase in the number of temples and liquor stores that make sake. With the development of commerce, sake has become as valuable as rice.

In the Edo period, sake brewing can be mass-produced by craftsmen, and the quality was improved. Techniques such as the “寒造り KanｰZukuri（cold brewing）" made in winter, the “温和法 Onwaｰho（warm method）" to adjust the aroma of sake, and the “火入れ法 Hiireｰho （burning method）" to improve the preservation have been developed and spread to the general public by the hands of merchants.

In addition, the current common sense that “water is important for sake" became known in the Edo period, and many good sake breweries have been establish in regions with famous water such as Nada.

Before the Meiji Era, people used to made sake at home on special occasions but in the Meiji era, homemade sake was banned and a “liquor tax" was set to impose a tax on sake. Sake will also follow the path of modernization, such as the establishment of a national institution that chemically researches brewing methods. 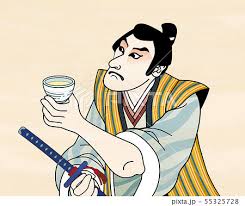 ◆ The customs of drinking Japanese sake in Japan

The habit of drinking sake is changing along with the times. Introducing past and modern customs and sake breweries that are now popular as tourist destinations.

◇ Sake was once drunk in Shinto ritual (Buddhist Shrines)

The scene of drinking sake was once limited to Shinto rituals such as praying for a good harvest. Sake served at shrines is still called “お神酒 Omiki", and sake and Shinto rituals are still deeply involved.

◇ The habit of drinking sake that remains today

Even in modern Japan, sake is indispensable for celebrations such as New Year and weddings. It can be said that ancient Japanese events and sake have an inseparable relationship, just like Shinto rituals.

A liquor store near Nada Ward, Kobe City, Hyogo Prefecture, with many sightseeing spots such as a museum and “Sake Brewery Road". It features a crisp sake called “灘の男酒 NadaｰnoｰOtokoｰZake". This sake is its slightly sour and dry taste has have strong aroma and texture.

It is a liquor store around Fushimi Ward, Kyoto City. It has a long history because it originates from a sake brewery made at a temple and shrine, and is characterized by a gentle and sweet taste called “伏見の女酒 FushimiｰnoｰOnnaｰZake（Fushimi Lady’s Sake）". Since it is also a landscape improvement area, it is a recommended area to be included in the Kyoto sightseeing route.

It is a sake shop near Saijo, Higashi-Hiroshima City, Hiroshima Prefecture. The person named Miura Senzaburo, who was born here, is said to be the creator of Ginjo Sake. It is also famous as a place of clear water, and you can enjoy more than 1,000 brands of sake at the “Sake Festival" held in October every year.

The technique to ferment rice into an alcoholic beverage was developed in ancient China. It arrived in Japan along with rice cultivation around 2,500 years ago. In Yayoi period, and it has a very old history. Sake, which was once drunk only in Shrines, has become widely enjoyed as the manufacturing method has been refined over time. Why don’t you think about the history of sake that you have walked with Japanese people by visiting sake shops as sightseeing spots and comparing famous sake.

How to Japanese sake brewing , Introducing all 12 processes in an easy-to-understand manner
Next

How to drink sake. How to compare sake deliciously!
Prev

What is the person in charge of sake brewing, ” 杜氏 Toji ” ?

What is the person in charge of sake bre ...

How to Japanese sake brewing , Introducing all 12 processes in an easy-to-understand manner

How to Japanese sake brewing , Introduci ...