Nabeshima, a famous sake from Saga! Thorough explanation of the charm of sake that has experienced the best in the world

Nabeshima, a sake that Saga Prefecture is proud of in the world. It has won numerous awards and has become known nationwide.
However, I think there are many people who have never seen this sake and have never drank it, even though it is such a powerful sake.
Therefore, this time, we will introduce the charm of Nabeshima along with the thoughts and stories of the brewery!

If you read this article, you will surely want to visit Saga prefecture.

Multi-awarded sake around the world “Nabeshima"

Nabeshima is a sake brewed by Tomihisa Chiyo Sake Brewery and is a representative of local sake in Saga Prefecture.
As I will introduce later, it boasts countless awards and can be counted as one of the representative sakes of Japan as well as Saga.

The “Nabeshima" series is characterized by its fruity aroma and mellow taste as a whole.
Also, it is a soft sake with a very gentle taste.

However, there are many people who have never actually drank or seen it. The reason is related to the commitment as a brewery.

That in mind, We would like to introduce Fukuchiyo Sake Brewery next.

● What is “Fukuchiyo Sake Brewery"?

Although the sake brewery is less than 450 stones, we started from scratch with the aim of “local sake representing Saga and Kyushu" and “loved local sake brewed with local rice and water" together with four young successors of local retail stores.

This area is a traditional sake brewery blessed with high-quality groundwater from the Tara-dake mountain range and rich soil suitable for sake rice cultivation. It is also known for its dozo-style townscape, which praises the atmosphere of a post station in the Edo period.

Founded in the late Taisho era, it boasts a history of about 90 years. However, Nabeshima was born in 1997 from Fukuchiyo Sake Brewery. Surprisingly recent.

In 1987, with the relaxation of the liquor license, handling of sake has become easier than before, and many cheap sake are now on the market.
In addition, sake is now lined up in supermarkets and discount stores.

As a result. It was a local liquor store that had lost its energy. No matter how delicious the sake was sold, it didn’t sell well and went bankrupt one after another. The wave of bankruptcy of liquor stores has also flooded Saga Prefecture.

Fukuchiyo Sake Brewery stood up here. With the motto of quality first and the determination to live with the liquor store in the town, we worked hard to develop the liquor loved by the locals and the liquor representing the locals together with the young successors of the local liquor stores in 1997. Finally, the predecessor of Nabeshima, “Fukuchiyo Ten," was born.

The product was well received, but the brand “Fukuchiyo Ten" was a temporary one that I put on after my worries.

● The name “Nabeshima" was born!

Fukuchiyo has decided to open a public offering for brands because he wants to make sake that is loved by local Saga people for a long time.
He thought that he could get closer to the community by having the locals give him a name.

As a result, “Nabeshima" was selected. It is said to be derived from the Nabeshima family who ruled the Saga domain for 300 years during the Edo period. In this way, “Nabeshima" was born in April 1998.

Multi-awarded sake around the world “Nabeshima"

After that, Fukuchiyo Sake Brewery pulled Nabeshima and won numerous competitions. Among them, In the world’s largest and most prestigious tournament, “Nabeshima Daiginjo" has been selected as the highest award in the sake category, “Champion Salmon".

Indeed, world-class Tomihisa Chiyo Sake Brewery.
Couldn’t imagine for it to grown into a big brewery, but successfully it did.

Fukuchiyo Sake Brewery chose to concentrate on creative work rather than mass production, with the idea of ​​going indie. The Brewery puts quality first and does not try to grow too large, but carefully brews sake in small quantities. Even after gaining worldwide popularity, we are striving to make local sake that is loved.

This is the reason why I said “I don’t see much" at the beginning.
We haven’t expanded the scale, so we don’t produce enough quantity to be available all over Japan at any time.

However, there is no doubt that it is loved by the people of Saga and sake connoisseurs all over Japan. 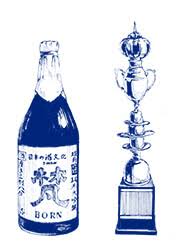 What kind of sake brand is 梵 Born?
Next

What kind of sake brand is 雪の茅舎 Yuki no Bosha?

What kind of sake brand is Aramasa?

A revolutionary child in the sake world! ...